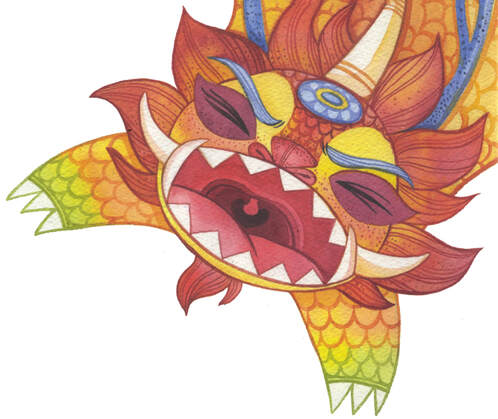 Legends say that in ancient China there was once a malevolent monster named Nian. Nian had two giant horns on its head and twelve sharp teeth embedded in its jaws like two piles of stinging daggers. Nian lived in the ocean, but once every year during the winter, Nian would crawled out of its hideout and devour any lives it encountered. The villagers of ancient China would flee their homes and hide in the mountain to escape Nian’s wrath.

​
Despite it’s daunting appearance, Nian feared three things: fire, explosive noises, and the colour red. Soon, the villagers discovered Nian’s weaknesses and decorated the village with giant, dazzling red curtains and lanterns to ward off the monster. When Nian came to the village for its annual feast, it was dumbfounded by the village’s festive appearance. Nian was a little startled by the red curtains and lantern, but it invaded the village nevertheless. As Nian wandered in the village, it could not find anybody; everyone was in their house having dinner with their family. Suddenly, a large, explosive noise erupted near Nian, and Nian jumped like a startled cat. “Pang!” Another explosion erupted. “Bang! Bang! Bang!” Soon, the entire village was flooded in explosions. Nian had never seen or heard anything like it before. It let out an angry roar and fled. Children came running from all around the village holding tiny firecrackers in their hand to chase Nian as it ran away. Soon, everyone in ancient China learned about Nian and every year before Nian’s visit, people would reunite with their family and decorate their houses with red colours and lanterns. Adults gave red pocket money to young children in spite of good luck in the new year. For me, the best part about Chinese new year is getting to see your distant family and have everyone reunite under one roof. On the last day of the Chinese New Year, families all around China will light spectacular fireworks, hoping that the explosion will not only scare away Nian and bad luck, but start a new year with a BANG.