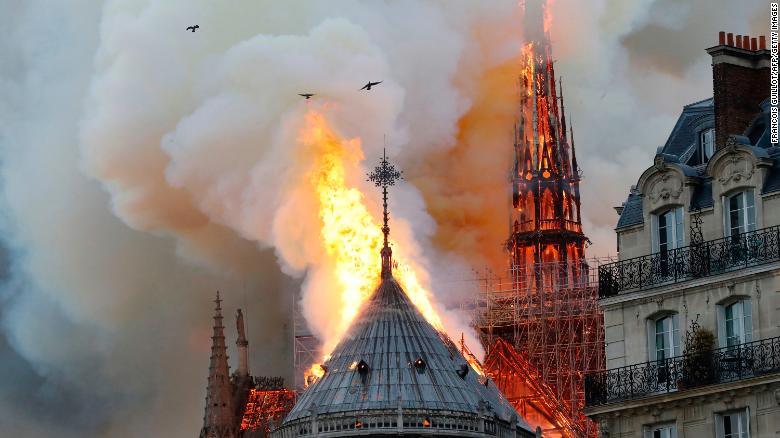 April 15, 2019, 18:30, Paris, France, the country and the citizens of France mourned as the majestic Notre-Dame cathedral, the cumulative efforts of generations of artists, believers, and worshipers, crumbled in front of their eyes. The cathedral, which took a hundred years to construct, was one of the finest architectural masterpieces of the human race. It witnessed the glory of the French Revolution, persisted though the chaos of the world wars, survived the bombshells of the Nazi invasion – yet, almost ten centuries after its completion, the cathedral surrenders its beauty to the brutality of the fire.

The fire took place on April 15. Major damages to the cathedral included the building's spire and a majority of its roof. Many historical artifacts were evacuated during the fire but many were still lost. The stone vault ceiling prevented further damage to the interior of the cathedral and contained most of the collapsed roof. The evacuation of the cathedral was done smoothly, and only three people were injured.

The firefighting effort was valiant as well as very challenging due to the cathedral's fragile parameters. Several mechanisms which could have reduced the time needed were not processed due to their potential harm to the cathedral. Such methods included dropping wares from above, helicopters, and high pressure water guns. These limitations grealy complicated the extinguishing process. With the combined effort of 400 valiant firefighters, the two towers –the cathedral’s most important assets– were unharmed by the fire. Most of the fire was extinguished by 23:30. The cathedral would have suffered much more severe damage had the fire been prolonged.

People from around the world showed great empathy. Emmanuel Macron, the French President, was at the site of the Notre Dame and addressed the despondent citizens of france. Religious leaders around the world also extended condolences to the loss of the French people. Many worshipers, believers, and lovers of the Cathedral gathered in front of the Seine river to mourn.

The reconstruction effort is already prominent. Shortly after the fire, nearly 900 million Euros were gathered from thousands of generous donors, companies and institutions, who extended their support for the beloved cathedral. The reconstruction is to take around twenty to forty years. Methods of reconstruction are still being debated.
Works cited