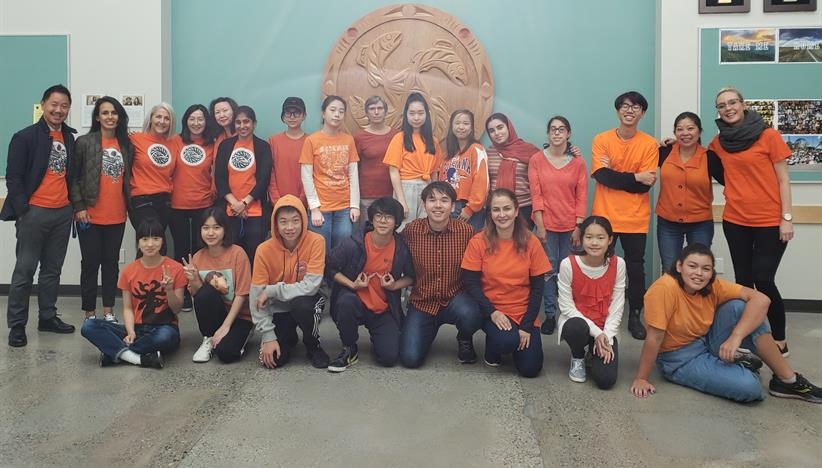 Orange Shirt Day, an official movement that began in 2013, is a national event dedicated to recognizing and commemorating the survivors of residential schools; mandated religious boarding academies that subjugated First Nations children to routine physical, sexual, and emotional abuse.

​Brutal and de-humanizing, an estimated 150 000 Indigenous youths were forced to forfeit their rural homes for obligatory academic institutions during a mass cultural genocide movement beginning in the 1880s, and carrying on into the 1990s (Miller, “Residential Schools in Canada.”). Children were forced to give up their religion and traditions in favour of Christian practices. This forced assimilation was intended to indoctrinate indigenous youths into Euro-Canada, stripping them of their language and cultural heritage.  It is a regretful period that students of U-hill, as well as schools Canada-wide, are attempting to shine a light on by displaying their acknowledgment and support for indigenous communities in the form of orange shirts. (Webstad, “Phyllis' Story.”)

The tradition draws its roots from the experiences of residential school survivor Phyllis Webstad’s first day at the St.Joseph’s Missions Residential School in 1973.  Webstad’s grandmother gifted the William’s Lake native a bright orange shirt; a rarity for an impoverished indigenous family, as well as a privilege that St.Joseph’s permanently confiscated upon her arrival. The immediate removal of her personal property quickly established the racial disparity between First Nations peoples and Caucasians. Like many other residential school survivors, this incident instilled in Webstad “feelings of worthlessness and insignificance, [...] affecting the way  [...she] lived [her] life for many years.” (Webstad, “Phyllis' Story.”)

The trauma inflicted on indigenous youths has had long-lasting impacts on Native communities, but the experiences of activists such as Phyllis Webstad goes to show that while pain cannot be erased, acknowledgment can still lead the path to reconciliation. Orange shirt day represents the commemoration of residential school survivors,  as well as a condemnation of the oppressive institutions that were forced upon this demographic. Diversity and culture is to be celebrated not eradicated. The students of U-Hill strive to promote an atmosphere of acceptance, remembrance, and anti-prejudice, by sporting orange shirts on September 30th.
​
Works cited