The International Year of Periodic Table 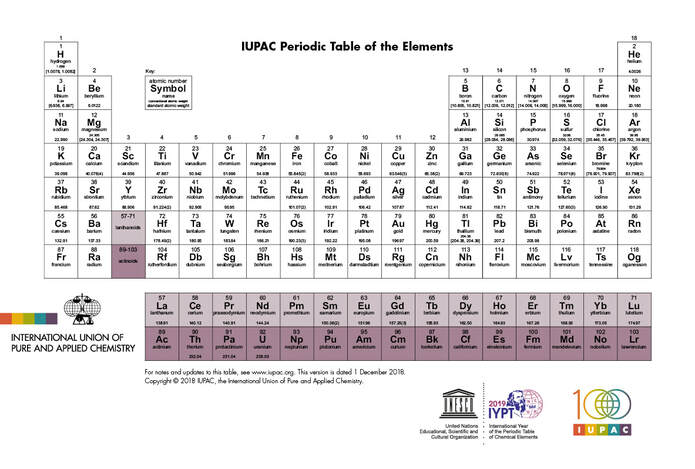 The United Nations has announced 2019 as the International Year of the Periodic Table of Chemical Elements. The periodic table has been published for 150 years since 1859.


As science has developed, 118 elements have been explored. Most people are familiar with the periodic table nowadays. It doesn’t just commonly appear in high school science classrooms, it is also a significant tool for scientists to understand, research, and explore. Numbers of global issues were improved by scientists with the use of periodic table, such as agriculture, education, health and energy. The periodic table is exceedingly convenient for people.


2019 also marks the history of the Periodic Table. It was first designed by the Russian scientist Dmitri Ivanovich Mendeleev. Since its creation, there has been plenty of debates on the periodic table. It has been considered as “one of the most important and influential achievements in modern science reflecting the essence not only of chemistry, but also of physics, biology and other disciplines.”


Chemistry had not been fully developed before 1800s. There were only 63 elements that had been explored and identified at that time. People still needed a lot of time to discover the other elements, so Mendeleev left gaps in the periodic table for the elements that had yet to be found.


Scientists before Mendeleev spent decades exploring chemical elements. However, they did not succeed in finding all the elements. As early as 1789, Antoine Lavoisier established a list of 33 elements and tried to classify them according to different properties.


Other scientists such as  Alexandre-Émile Béguyer de Chancourtois, John Newlands and Julius Lothar Meyer each published their own version to arrange elements. A helix, chart, cylinder and even a spiral were created as various types of rearrangement of elements, but none was regarded to be a perfect fit until Mendeleev’s publication.


In the following years, the discovered elements matched Mendeleev’s predictions, and this is known as the brilliance of the Periodic Law by Mendeleev.


Fifty five elements have since been discovered and they are all listed by order of their atomic mass. Of course, they have the properties foreseen by the latest periodic table, explaining why Mendeleev’s way of ordering elements was so successful and has been considered as a huge development and contribution for science.