Time’s Up: How the recent K-pop scandals unfolded and what they convey about the truth of South Korea’s iconic, lucrative industry 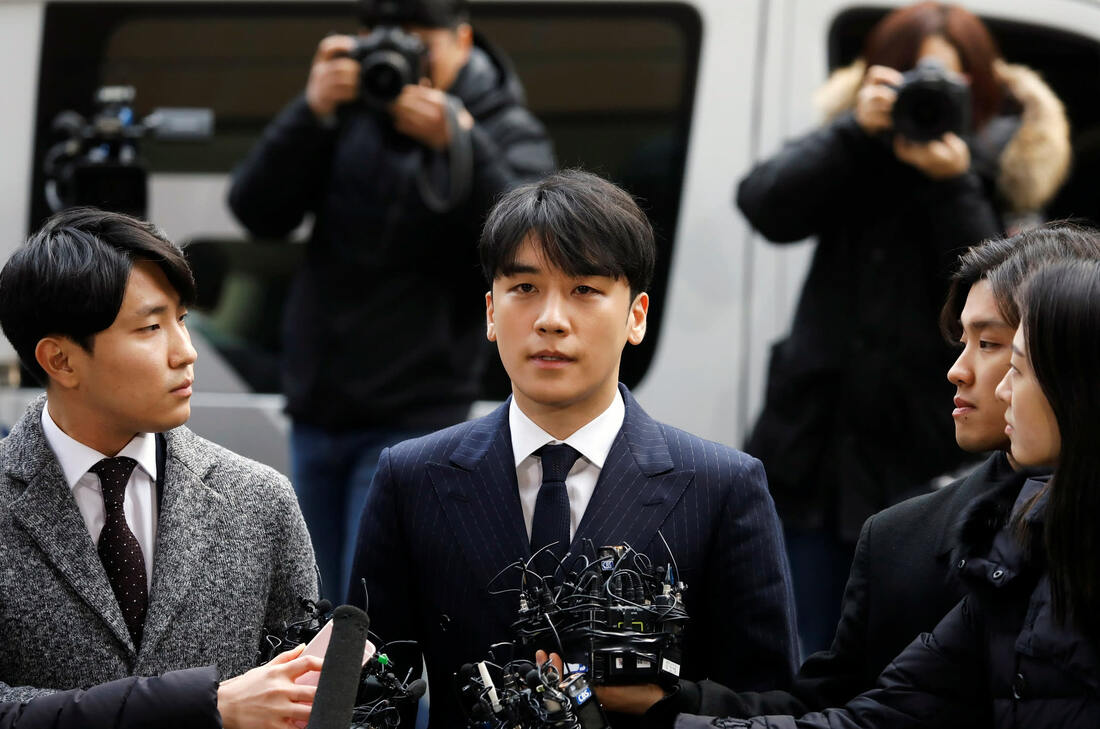 
On January 28th, 2019, a man named “Mr. Kim” was interviewed by South Korea’s MBC news agency regarding the appalling nature of the interviewee’s encounter with a police officer. According to the man, he was at the Burning Sun –a club in downtown Seoul known for serving the ultra wealthy– when he was assaulted by an employee at the club. “Mr. Kim” had immediately called the police. However, the police officer, rather than assisting Mr. Kim, had allegedly harassed him.

The releasing of Mr. Kim’s story would catalyze the uncovering of outrageous crimes committed by some of South Korea’s most admired celebrities.
One of the Burning Sun’s representatives was Seungri, a former member of BIGBANG, arguably the most successful boy band in K-pop history. For a few weeks following the report on Mr. Kim’s encounter with the employee and the police, Seungri and the CEO of Burning Sun attempted to dismiss the story and made light public apologies. However, during the same time period, other news reports were made concerning the possibility of illicit activities taking place at the Burning Sun.

On the 26th of February, it was discovered that Seungri had been ordering his employees to supply prostitutes for foreign investors who visited the club.

Soon, authorities began investigating the case. Several other men were implicated. As the investigations continued, it became clearer that Seungri was responsible for illegally filming women performing sexual acts, while permitting the drugging and raping of women by employees and guests at the club. Moreover, Seungri was found to be involved with conducting tax evasion and attempting to obstruct justice, among other crimes.
In March, it was revealed that another artist named Jung Joon Young also produced illicit videos of women; like Seungri, Jung was part of a chatroom in which such illegal videos were shared and commented on by the chat’s participants. Further investigations into the chatroom found other K-pop figures, such as Roy Kim and Lee Jong Hyun of CNBLUE, tied to a number of incriminating activities.

In April, Jung-Joon Young was arrested by the South Korean police. Officials in law enforcement are currently seeking an arrest warrant for Seungri, and likely for other ex-idols implicated in these scandals as well.

To many South Koreans, for whom the aforementioned events have been reported as part of their daily newsfeed for the past several weeks, these identified offenses do not seem excessively shocking. To these individuals, an aspect of Korean culture is the viewing of women as lesser than men, and, to an extent, the objectification and sexualization of women. Choi Mi-jin, president of the Women Labor Law Support Center, agrees. She states that the illicit filming of women is an “[issue] ‘prevalent in every part of [Korean] society’”. Moreover, other Koreans argue that the sole reason why these scandals are the center of the media’s attention is that the perpetrators are well-known in Korean society. According to these individuals, had the crimes been committed by a nameless, ordinary person, the larger issue or the crime itself may have been once more swept under the rug. At the same time, many South Koreans do recognize that the reporting of this scandal has succeeded in bringing to light the need for the country to change.

Apart from only demonstrating the problems arising from Korea’s lack of gender equality, these scandals illustrate the unscrupulous nature of the K-pop industry itself. The fact that the multiple years of crime have only recently been divulged points to how K-pop companies are able to hide such abuses from authorities. And the more companies protect their singers by deceiving the public and bribing officials, the more K-pop stars are able to feel secure in carrying out unspeakable crimes. The result is the empowerment of individuals who desire to do great harm to society.

One final lesson to be learned from these recent scandals is the importance of not being complacent with the information we have. If the media had chosen to drop their suspicions against Burning Sun or Seungri after their attempts to dismiss accusations earlier this year, we may not have been made aware of the horrendous crimes that took place behind closed doors. It is only by not giving up on the search for truth that we can uncover the real events –and attaining the truth is the only means through which we can achieve justice.