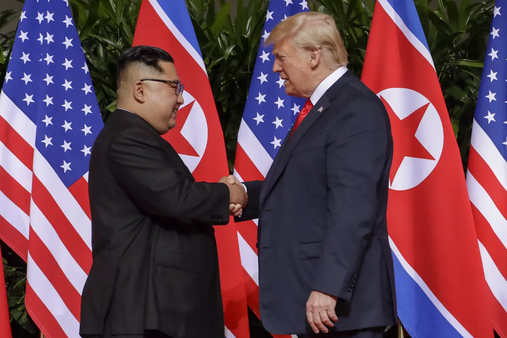 Transformation may be an appropriate word to describe what the outward relationship between North Korea and the United States has undergone during the time of over a year. Since President Trump’s inauguration in November of 2016, the rollercoaster relations began as nothing less than hostile, and the level of antagonism gradually heightened, with the phrases such as “Little Rocket Man” being thrown from one side and the aggressive Twitter exchanges making the rounds. However, at an extraordinarily rapid pace, the tide turned, and the relationship warmed in the days leading up to the U.S. - North Korea summit. Then the summit arrived; it was the first time an American President met with the Chairman of the Democratic People’s Republic of Korea.

The United States - North Korea Summit of 2018 was held on the 12th of June at the Cappella Hotel in Singapore. The leaders of the two countries, President Trump and Kim Jong Un, held a private conversation for forty minutes, and later signed a joint declaration which contains a now much-cited clause involving the “complete denuclearization of the Korean peninsula”, among others.

Those who see the summit in a positive light explain that it was significant for a couple of reasons. First, the meeting in and of itself demonstrates that the relationship between the U.S. and North Korea, states previously considered enemies, is no longer hostile. People across the globe, especially those living in the Korean peninsula, now feel much more secure knowing that the likelihood of an outbreak of war is far lower. Second, the improvement in relations establishes a foundation for economic growth in North Korea. Third, this meeting will pave the way for future talks between the U.S., the Koreas and other regional powers. Fourth, President Trump and Kim together recognized and gave the undertaking that they would “work [towards the] complete denuclearization of the Korean peninsula” at the meeting. Such a declaration marks a huge step forward towards peace in the international community.

But, as always, there are critics who find that the shortcomings of the summit outweigh its successes. What is argued as one of the main shortcomings is the failure of the joint agreement to include a set time frame nor a provision that would allow for the verification of the denuclearization in the DPRK. Moreover, they assert that the United States choosing to suspend the military exercises conducted by troops of the United States and South Korea was not only unanticipated, but that it was the wrong decision. Critics maintain that by the end of the summit, victory was handed not to President Trump, but rather, to Kim. And to Xi Jinping, the President of China.

When the leaders of two countries that were enemies in recent history meet and shake hands, it represents a change. When the leaders of such countries can reach a compromise, it represents progress. When the leaders make an agreement to “work towards complete denuclearization” and the security of the world, it represents hope. Perhaps, the “important documents” were vague indeed, and yes, tangible changes may not be brought quickly. However, this year’s summit between the United States and North Korea serves to prove a crucial point: something that seems most unlikely or even impossible can happen. Anything can happen.
​
If anything can happen, then there is every reason to believe that the outcomes of the summit will surpass our expectations.
Works cited